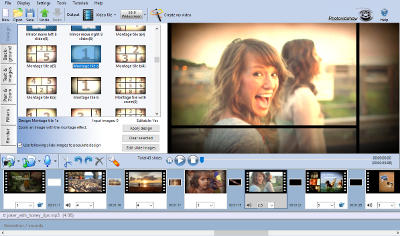 Version 4.5.3 of PhotoVidShow has been released. This version includes minor fixes for the popular version 4.5.1

• Mp4 video files created by PhotoVidShow can now be imported back into PhotoVidShow without causing errors and frame rate issues.
• Fixed issue with seeking video and then preview playing not playing correct part of video.
• Removal of SVCD and VCD support. These ancient formats are rarely if ever used.
• Minor stability fixes.
• Steam and Windows Store support which includes a version for Windows 10 S (mode)
• Removed the need for Microsoft direct show filters needing to be installed at installation time. 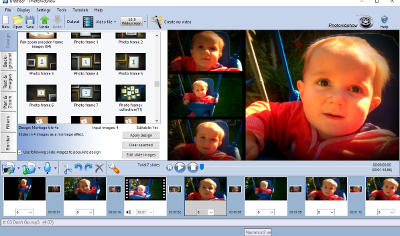 Version 4.5.1 of PhotoVidShow has been released. This version includes improvements and fixes.

• Better support for importing mp3's which have been encoded with VBR (now correct music length).
• Fixed occasional blank thumbnails being shown for video slides.
• Better support for projects that use lots of memory.
• More support for audio and video formats.
• No longer need to install additional video codecs on Windows Vista to import .mov and .mp4 files.
• Uses Windows Edge browser where appropriate instead of IE.
• Many small GUI improvements.
• Fixed crashes that could occur when moving to a different project aspect ratio.
• Faster response time when doing video trimming.
• Fixed problem on blu-ray authoring, where occasionally some videos would not play on certain blu-ray players. 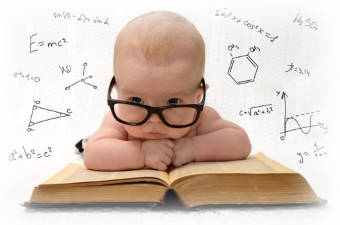 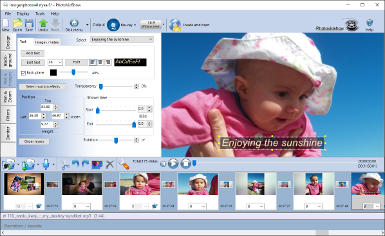 Version 4.4.1 of PhotoVidShow has been released. This version includes improvements and fixes.

• Support for amazon mp3's which contain large embedded pictures.
• Speed ups when moving and adjusting video decorations when editing slides.
• Can now fade in and out audio on videos.
• Can now manually set the audio fade length for video, music and narrations.
• Increased the 400 slides per slideshow limit to 1000 slides.
• Better support for .mov files that contain a MJPEG video codec.
• Should now not have the '31 Failed to read DVD structure' problem when burning. This was being caused by a firewall or anti-malware software blocking PhotoVidShow.
• User can now change the default folders to look for photos, music and project files.
• Updated to Microsoft .net framework 4.6.1 (Default for windows 10). Non Windows 10 users, may need to install this version of .net, but will be prompted at install time'. Unfortunately this means we have dropped support for Windows XP.
• Added delete button shortcuts.
• Fixed issue with storyboard times not updating after a trim video had been done.
• Added a 'Low' quality setting when video creating. I.e. useful if the video is destine for a web site and going to be streamed.
• Now no longer trims music that is repeated in storyboard.
• More warnings when music track play time is outside slideshow times.
• Music bar in storyboard always shows music name even when scrolled.
• Fixed issue when border decoration not always shown in storyboard thumbnail.
• Changed default menu font to better match default menu background.
• Automatically selects BD driver over DVD drive when burning BD discs.
• Fixed possible lock up issue if warning about not enough hard-drive space is shown.
• Removed 'Play All' type menu buttons for SVCD and VCD. They couldn't be used for these output types anyway.
• Re-linking media files, now shows the original path of the missing files.
• Fixed issue that you could not set the menu music to 'Nothing'.
• Extended option to insert a blank slide or picture before a slide, as well as after.
• Removed the ability to accidentally remove a slideshow thumbnail button from a menu via the 'Order layers' screen.
• More countries added on the PAL/NTSC automatic detection and selection when burning DVDs.
• Fixed issue where the 'DVD burner tool' would not launch if another different version of StartBurn was installed on the computer.
• Added .m2ts extension to the allowed extensions types when importing video.
• Fixed issue where 'motion effects' window not showing correct decoration when setting motion on a menu decoration.
• Fixed issue where music not always seeking to correct position when stopping and then re-playing in preview.
• Fixed issue with Blu-ray discs not working with 'Ignore menus' option turned on.
• Reduced default cached video players at once to 4 when editing. This helps memory issues when importing lots of 1080p video.
• Videos now work better in some more complex slide designs e.g. 'Wooden pan around' design.
• Fixed issue with blank video thumbnails occasionally appearing in storyboard.
• Now automatically reduces resolution of 1080p videos when editing, to reduce memory and improve speed. Output quality not effected though. 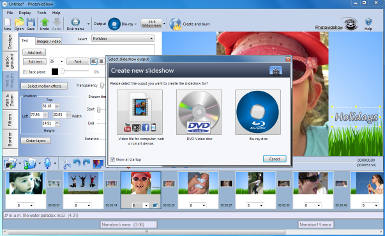 Version 4.3.1 of PhotoVidShow has been released. This version contains new features as well as improved compatibility with video input media.

Version 4.2.3 of PhotoVidShow has been released. This version is a small update to our successful version 4.2.1 and 4.2.2 build. This version adds additional support for more graphics cards.

• Improved support for more graphics cards including Intel HD and Radeon R7 2xx range. This fixes issues when encoding; including output videos which freeze on playback or cause the graphics drivers to stop working when encoding.
• Other small GUI improvements and minor bug fixes. 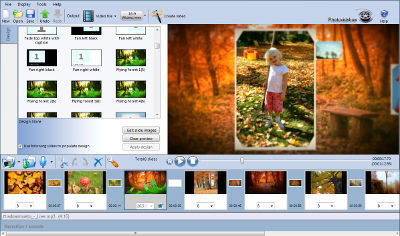 Version 4.2.2 of PhotoVidShow is now here. This version is a small update to our successful version 4.2.1. For users with computers that have an integrated Intel HD 4000 range graphics card, you can now create HD movies without issue. 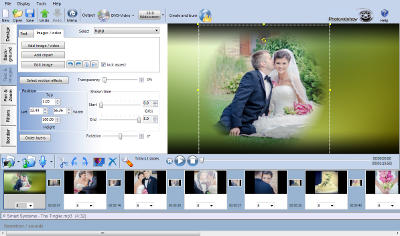 Version 4.2.1 of PhotoVidShow has been released. This version fixes some minor issues as well as improving stability and compatibility. Also for Windows 7 and Windows 8 users, you now no longer need to install the ffdshow codec pack to import .mp4 and .mov video files.

• Works natively importing .mp4 and .mov video files on Windows 7 and 8 machines. Windows XP and Vista users still need to install the ffdshow codec pack to import these type of video. The manual install of the Haali media splitter is no longer required.
• Many minor aesthetic improvements in the editor.
• Better support for importing video that contain ac3 audio (especially video containing 6 audio channels)
• Fixed issue where total slideshow time could be wrong when encoding.
• Added ability to add a blank slide other than just appending it to the end of the slideshow.
• Added ability to quickly add a fade in/out effect to a decorations without needing to bring up the motion effects window.
• Now remembers your favourite output project type when restarting.
• Fixed issue where sometimes having to do two file re-links when importing an old V3.1.4 project file.
• Now force uses built in window mp3 decoders when doing audio ripping.
• Fixed issue where setting a video audio to 0%, was still producing a video with very quite sound.
• Fixed issue where preview seeking a slide containing a video wasn't always showing the correct frame.
• Better support for importing .mkv video files.
• Better support for importing mpeg-2 video files.
• Fixed slight audio syncing problem when encoding with some HD .mov videos.
• Fixed occasional freeze problem in Windows 8 when importing and/or encoding some video files.
• Fixed issues where some narration files no longer played after they have be moved in the storyboard panel.
• Minor fixes to the template slide designs.
• Can now optionally use ffdshow to decode video files (if ffdshow installed and using Windows 7 or 8)

We are proud to reveal our new website with improved pages, including new forum, online user manual and example slideshows. 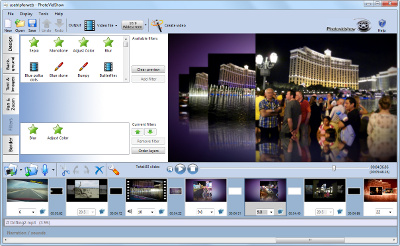 We are pleased to announce version 4.1.8 is available.

• PhotoVidShow minimal install available as well as the traditional full install. This version is quicker to install and now downloads media files as required from our server.
• Updates to our pre-slide template designs.
• Minor bug fixes to the editor.

We have release an update to version 4.1.7

• Better support for older project files from version 3.1.4 and previous
• Updates to our pre-slide template designs.
• Minor bug fixes to the editor. 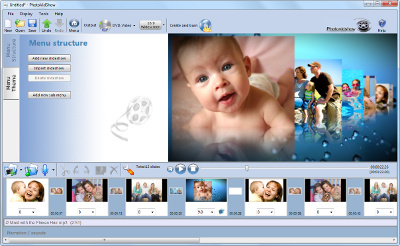 We are pleased to announce a new beta version of PhotoVidShow is available. This is a big update release since our last release back in 2012

• Addition of Mpeg 4 (h.264) video creation, include HD 720p and 1080p.
• A selection of fantastic looking slide pre-design templates.
• Ability to set movement effects on text, images and video.
• Ability to set start/end shown times for slide decorations.
• Motion blur on rapid movement on final output videos.
• Filter effects including:- lens blur, sepia, and many texture blending filters and video.
• Fully crop and adjust the color of input material as well as setting an outline mask.
• Arbitrary rotation on all video, text and images.
• Ability to record a narration for a slideshow.
• Lots more built in backgrounds and clipart.
• Addition of slide borders, including Vignette effects.
• Additional font creation ability as well as pre-defined font styles.

PhotoVidShow DVD slideshow authoring software is founded. With a simple mission of creating an easy to use tool allowing anyone to create a DVD slideshow as easily as possible.